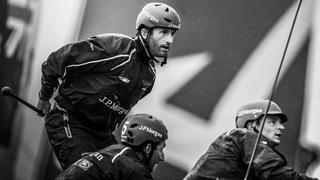 It’s good to be able to report that we spent the autumn sailing our foiling AC45 from the team’s temporary base in Southampton. This was the boat that BAR (Ben Ainslie Racing) competed in during the 2012-13 America’s Cup World Series. We modified it to use as a testing platform because the rules allow you to test a boat only up to 45 feet (13.7 metres), so the AC45 then becomes the obvious choice.

We talked about this almost as soon as we got the design team together at the beginning of 2014. We came up with a plan, based on our best guess of where the Cup was going and what the eventual rule for the race boat would be – at this stage, this boat is not really so much about the sailing side, it’s more of a design tool. Design is central to winning the America’s Cup in 2017. If we go back to the 2003 or 2007 Cups, the gains in design were minuscule compared to what we are facing in this current world.

We are just scratching the surface of what’s possible with these foiling boats and wing masts, so with this first boat we wanted to try different concepts and to build communication channels between the design team, the shore team and the sailing team. Some of the modifications were quite large, requiring a high level of engineering and design input.

We also needed to start working with the suppliers we had chosen. It was a great process to go through.

Once we’d decided what to do, it took two months of design and preparation work and three months of construction to modify the boat. It’s been a key process in formalising the partnerships between the designers, engineers, suppliers and builders.

The day of the launch was really exciting. It was the culmination of a lot of hard work, and for things to run as well as they did was a huge credit to everybody. For us sailors, it was a joy to get out there and have a tool that was working as we expected. But obviously it’s only the first step in a long process of testing, refining and developing...

We had another big day in October, with the launch of the 1851 Trust, which aims to inspire and engage a new generation through sailing and the marine industry. Our base will be in Portsmouth and we need to make a difference there: to the community, the economy, creating jobs and apprenticeships, working with local colleges and schools and linking into the STEM (science, technology, engineering and mathematics) agenda, to inspire new engineers into the marine industry. The Duchess of Cambridge, a keen sailor herself, kindly agreed to be the Royal Patron for the 1851 Trust and we’ve got a great group of trustees headed by Sir Keith Mills and including philanthropist Wendy Schmidt, chairman of UK Sport Rod Carr and Rear-Admiral Rob Stevens.

To launch the 1851 Trust, we ran an art project at the construction site of the new base that was a real success. We got young people from schools around Portsmouth and the Isle of Wight to share their maritime heritage through the pictures they painted on the hoardings.

Everyone who came was also surprised to see how far work has developed on the base – the guys are doing a brilliant job. It’ll be another big day when we move in and open the visitors’ centre to the public: another part of the work we’re doing with the 1851 Trust. We hope to have a taste of that at the London Boat Show in January, so come along and say hello.