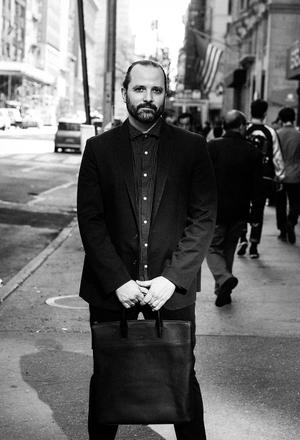 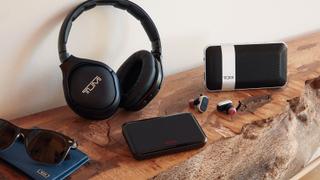 Victor Sanz, creative director of Tumi, tells Harriet Mays Powell how an item of luggage can also be a piece of art...

Wealthy consumers continue to spend and luxury travel is close to the top of their shopping lists, a trend that translates into significant potential for the luggage market. Indeed, travel accessories are expected to grow globally into a $5 billion business by 2020. Last year saw Chanel choose an airport theme for its spring/summer show, tapping into the zeitgeist, and LVMH taking a controlling stake in Rimowa. And this was in the wake of Samsonite’s purchase of the American brand Tumi for $1.8 billion, making it by far and away the world’s largest luxury suitcase manufacturer.

An aspiring artist and sculptor in his youth, Victor Sanz studied art at the Pratt Institute in Brooklyn. There he was introduced to industrial design, and was also intrigued by mass production that enabled art to “get into the hands of many.” He began his career as a designer of digital cameras at Eastman Kodak, but Sanz admits he already had an “itch for fashion.”

In 2003 he joined Tumi, becoming creative director in 2016. His long tenure meant he was fortunate enough to work under the company’s founder, Charlie Clifford, who was “a fantastic mentor and leader, instilling the values of what the brand is still about.” Clifford taught Sanz a few simple but enduring tenets: “Always focus on the customer; push to create inspiring products; never rest on your laurels.”

More than 40 years since Tumi’s founding, the world has changed – and Sanz understands this. “Now you start your day in New York, end it in Milan, and then fly on to Hong Kong. It’s no longer about going from home to the office; the world has become your office.” Sanz knows that his customers are going directly from “the airport to meetings.” Today, he says, people want their travel goods to be an extension of themselves. “You spend a lot of time with your luggage, you live with it, it’s your home away from home.”

Sanz is sure that Tumi’s success comes from a deep understanding of its customers and that using their feedback is key. He strives to maintain close relationships with store managers and also chats to people anonymously at airport baggage carousels. “A great idea is a great idea,” Sanz says. “It doesn’t matter where it comes from – whether from bumping into a stranger in a departure lounge, or from a top Tumi designer.”

Designing luggage presents a specific set of challenges, from weight and size limitations imposed by airlines to demands for durability. Sometimes Sanz develops products solely based on his perception of how the world is changing. At other times he responds to an innovation or a new material. “Up next is a new material called SRPP, self-reinforced polypropylene.”

Tumi strives to marry engineering and design so that the lines between the two become blurred. “We are able to remove parts, to minimise the number of elements that can fail, through engineering,” Sanz says. This rigorous design process means that if a problem does occur with a zipper pull, a wheel, or a handle, it can be fixed in-store in minutes.

Above all, Sanz is constantly pushing his team to deliver products that stand out, in an industry where a degree of sameness is the norm. But there is very little design for design’s sake. Everything has to have a purpose. And that’s where the challenge lies, because the products have to be beautiful as well as functional.

Aiming to be the best in class, Tumi recently launched its first aluminium cases in a collection called 19 Degrees. Sanz claims that this collection combines “architecture, design, art and travel” in a style that is characterised by sculpted angles that push past being merely utilitarian. “It is an example of how luggage can almost become a piece of art,” he adds proudly.

From the first sketch to the first sample, there is an enormous amount of testing, in the lab and on the road. Sanz travels with prototypes, and has been known to take four on a trip because he wants to discover first-hand what is working and what isn’t. Out of the cases Sanz took with him on a recent journey to China, he is particularly fond of an early model of 19 Degrees. Another bag has been around the world about 10 times, and been lent out to people on multiple occasions, with “the objective to put this thing through the ultimate paces; it’s still surviving!”

But where does the man who has traveled the world many times over most like to be? Sanz tells me that his favourite places are Tokyo and “anywhere in Italy.” But home, he says, will always be the East Coast, where he was born, raised and still lives.

Make your case: How Globe-Trotter is taking luxury luggage to the next level

8 of the best luxury suitcases