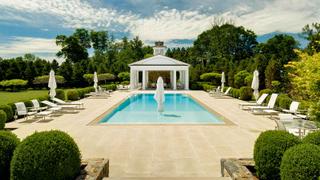 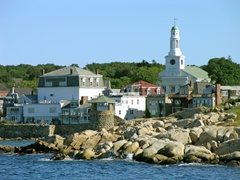 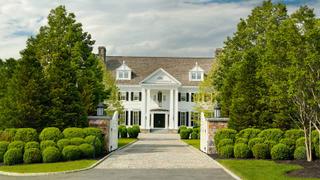 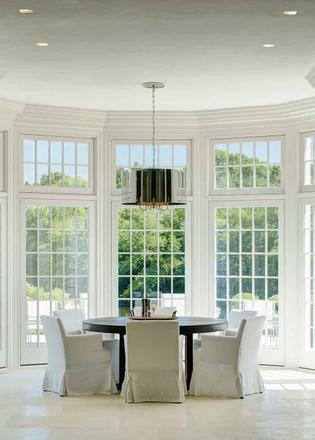 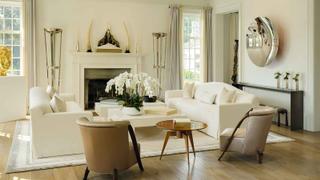 Property of the month: A Georgian-inspired estate in Greenwich, New England

If you are seeking a slice of colonial luxury in historied New England, now may be the best time to grab a bargain and our property of the month, a Georgian-inspired estate built for a music mogul in Greenwich, Connecticut, offers old world grandeur less than an hour from Manhattan, says Francesca Steele...

A region for all seasons, between them the six states of New England offer richly coloured autumns, verdant springs, summers of seafood feasts and crisp winters on low-key ski slopes. It is arguably America’s most historic region, with its 18th century revolutionary roots, colonial architecture, lush landscapes and fresh coastal getaways.

It is home to the educational institutions of Harvard (Cambridge, Massachusetts) and Yale (New Haven, Connecticut) as well as many of America’s millionaire financiers, who buy and build mansions here. All the New England states – Connecticut, Maine, New Hampshire, Rhode Island, Massachusetts and Vermont – are in the top 12 states with the highest cost of living across the US.

Despite this pricey reputation, the older colonial mansions are a bit of a bargain at the moment as the property market has become more focused on new build starter homes in cities preferred by millennials. According to RE/MAX Integra’s 2017 market outlook report, larger older homes in more rural or waterfront locations aren’t flying off the shelves as they once did – good news for anyone hoping to bag a mansion in one of the key summer draws such as Nantucket, Cape Cod and Martha’s Vineyard, or the hedge fund hotspots along the “gold coast” of Long Island Sound in Connecticut, from Bridgeport to Norwalk.

Robin Kencel, a broker at Douglas Elliman Real Estate in Greenwich, Connecticut, says that the first quarter of 2017 has shown double digit growth in sales, indicating a strong start to the year. “That said,” she adds, “there are strong inventory levels, so buyers are getting great value for their dollars, perhaps more now than ever before.”

For the wealthy homeowner looking for green spaces and New England clam chowder, within spitting distance of the bright lights of New York City, Greenwich, Connecticut has to come top of the list. Just a 40 minute train ride from Grand Central Station, this is sometimes considered to be a pseudo New York suburb for those with deep pockets, but it is also one of the best places in New England for sailing. The area has several old yacht clubs with access to Long Island Sound and substantial marinas, including Indian Harbor, which was set up in 1889 and organises racing and community sailing.

Attractions like these were what helped to persuade the record producer and property fanatic Tommy Mottola to build his 14th house here, a Georgian inspired estate that took four years to design, construct and decorate. The former Sony executive, who worked with Carly Simon, Diana Ross and Mariah Carey (to whom he was once married), bought the plot in 2010 with his wife, Mexican pop singer Thalia. Mottola has now found another plot in Greenwich, hence the sale. This nine bed, 14 bath property is on the market with Douglas Elliman for $19.95 million.

The colonial style house is a gleaming white example of perfect symmetry, with a columned portico and carefully arranged, landscaped terrace. It was designed by Sherman Architects, with high wooden beamed ceilings that lend some rooms a hunting lodge style, and wide, open gallery-style spaces. “I am not easily impressed,” says Robin Kencel, of Douglas Elliman, “but every room, from the Great Room with its 200-year-old beamed dramatic ceiling, to the two storey bathroom and dressing room with its glass staircase, has something spectacular about it.”

Inside, the property covers more than 1,115 square metres, not including a basement level with gym, playroom and beauty salon. There are his and hers dressing rooms, a lift between the home’s four levels and a terrace with an outdoor kitchen and fireplace – and views of the lake. Naturally, given the current inhabitants, there is also a recording studio. “For me personally, the chef’s kitchen leading to the breakfast room, overlooking a scenic lake and across to the double family room, are an incredible set of rooms,” adds Kencel.

The house has its own island, with a private bridge, and the land was once used as a horse farm. That pastoral feel is exactly what makes the area so popular with those members of the metropolitan elite who are looking for a calmer lifestyle, while Greenwich itself, just a few minutes’ drive away, has a wide range of upscale food, bars and shopping along “The Ave”, the main thoroughfare.

Property of the month: A beautiful beach house in the British Virgin Islands

Expert's guide: Where to buy luxury property in the Mediterranean now