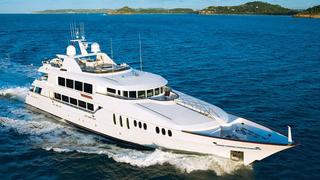 Continuing the trend of big price cuts in the run up to the Fort Lauderdale show, Frank Grzeszczak at International Yacht Collection tells me that the 45.7m motor yacht Carpe Diem II has been reduced by $1 million.

Built in 2002 by Trinity Yachts, she features a classic interior by Carol Williamson, and sleeps up to 10 guests in five cabins. Her two original Caterpillar 3512B engines give her a top speed of 20 knots and a cruising speed of 16 knots.

She was refitted in 2006, and again earlier this year, including a new paint job and the addition of zero speed stabilisers.

Carpe Diem II is now asking $17.95 million, down from $18.95 million. She will be on display at the Fort Lauderdale International Boat Show next week.