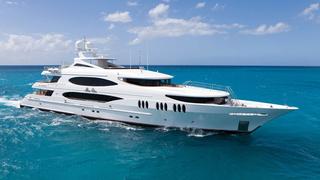 Delivered in 2010, she’s a sistership to the same yard’s Mine Games and Norwegian Queen, although with several improvements. Notably these include a sixth stateroom on the bridge deck so that her elegant Patrick Knowles interior now accommodates 12 guests in comfort. Twin 2250hp Caterpillar engines deliver a cruising speed of 19 knots and Mia Elise already has a guaranteed $2 million of charter income in 2012.

Currently in the Bahamas, Mia Elise is now asking $31.5 million.