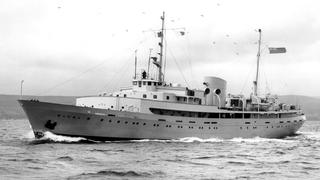 Tony Hashfield at SuperYacht Technologies in Australia tells me there's been a $2 million price reduction on the the 63.5m motor yacht conversion project Wyuna.

Built in Glasgow in 1953, she was in full commercial service for over 50 years, and was operational until 2004. A creative re-design of the upper deck areas would allow the vessel to have a variety of private areas for guests, while her voluminous interior has the space to create a number of staterooms. Wyuna’s cruising speed is 13.5 knots and she has the ability to cruise the world in style and comfort.

The owners have decided not to proceed with the project and the vessel will come with a complete refit package/study which was produced over a year by BAE Systems, the worldwide defence contractor.

Together with SuperYacht Technologies they produced the time line for rebuilding the vessel into a fully Lloyds classed charter superyacht and Wyuna is now asking just US $500,000.