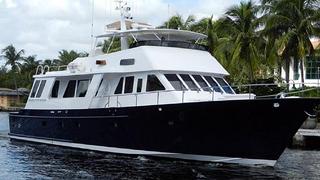 A call to 26 North Yachts brings news that they've found a buyer for the 27.74m motor yacht Nirvana listed by Chris Liptak at Four Points Yacht.

Built by Palmer Johnson in 1999, Nirvana had an interior update in 2011/2012 and accommodates six guests in a master suite and two double staterooms. Twin 2000hp MTU engines give her a cruising speed of 20 knots.