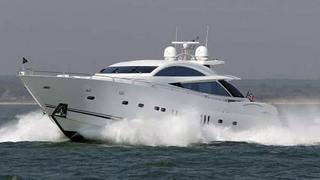 Built in 2007 and exemplifying the Predator principle of narrower hull forms, higher speeds and agility, the Predator 108 can rightly be viewed as an extreme vessel. The rakish, minimal superstructure and arrow-head foredeck arrangement all express inherent high performance delivered by twin 2000hp MTU engines.