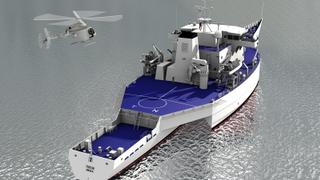 The 98 metre trimaran motor yacht Triton has been listed for sale by Ocean Independence.

The Triton trimaran research vessel was a technology demonstrator ship for the Royal Navy’s future surface combatant frigate requirement, but never entered service. It was then sold on to the MCA and is now listed for private sale.

Built in steel by British yard Vosper Thornycroft to DNV class, Triton was delivered in 2000 and is now a yacht for sale to convert into a support vessel. She has 48 berths in total. Many cabins are en-suite and there is a mix of single and double cabins, all provided with bunks, storage and desks.

The vessel's three parallel hulls are reflected in her name which refers to the maritime god Triton who carried the three-pronged spear, the trident. The outriggers are thinner and much shorter than the dominant central hull.

Her top speed is 16 knots and she boasts a maximum cruising range of 11,520 nautical miles at 12 knots with power coming from two 2,790hp MTU 16V4000 diesel electric engines

Ocean Independence has approached a naval architect who would be willing to put together a portfolio of proposals for the changes required to convert Triton into a superyacht support vessel.