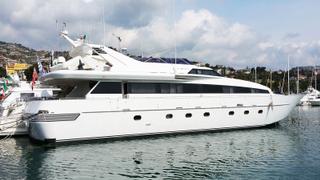 The 30.48 metre motor yacht Charlotte has been sold with both the buyer and seller represented by Jonathan Browne at Ocean Independence.

Built in aluminium by Italian yard Cantieri Navali Lavagna to ABS class, Charlotte was delivered in 1999 as an Admiral model. Accommodation is for eight guests in four cabins consisting of a master suite, VIP suite and two twin cabins, all with entertainment systems including LED television screens and all with en suite bathroom facilities.

The large saloon has settees to port and starboard with a built-in bar aft and an entertainment centre including a Samsung television screen. Forward is a formal dining area and further forward still is a fully equipped galley with a breakfast nook for casual snacks.

Outdoors, the aft deck is sheltered by the flybridge overhang and offers al fresco entertaining and dining at a set of bistro chairs and a table while the flybridge is massive – ideal for large parties with extensive seating to port and starboard, a bar and electric grill. Twin 2,285hp MTU engines give her a cruising speed of 20 knots and a top speed of 24 knots.

Her broker, Jonathan Browne, comments: “The yacht’s interior is in a very good condition and a recent survey confirmed that the vessel is structurally sound.”