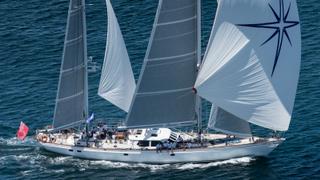 The 28.04 metre sailing yacht Tawera has been listed for sale by Tim Carbury at Fraser in Palma.

Designed by Ron Holland, Tawera was built in aluminium by New Zealand yard Alloy Yachts to Lloyd's class and delivered in 1995 with an extensive refit in 2017. She most recently proved her mettle by winning both the 2015 and 2016 New Zealand Millennium Cups and is now aiming to complete in the 2017 event. Accommodation is for six guests in three cabins comprising a full-beam master suite and port and starboard mirror-image twins. All cabins have entertainment centres and en-suite bathroom facilities, while a further two cabins sleep four crew aboard this yacht for sale.

In the deck saloon is a portside dinette raised on a plinth and seating six guests on couches in an elongated C-shape, while to starboard is a well-organized chart table. Three steps lead down to the lower saloon with a semi-circular dinette to starboard and to port is a small library along with an entertainment centre including a television screen.

On the technical side, she carries a full set of North 3Di sails, new in 2016, in her wardrobe and her main mast, mizzen mast and booms are all in aluminium, made by Southern Spars in New Zealand. Under power, a 235hp MTU engine allows a cruising speed of nine knots and a maximum speed of ten knots.