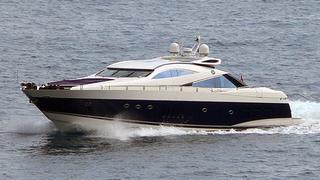 Designed and built to RINA class by Sunseeker International in 2003, her interior by Ken Freivokh sleeps six guests in a master suite along with a double and twin cabin. But perhaps her most important selling point is outstanding performance. Three 2000hp MTU engines harnessed to triple Arneson surface drives deliver a cruising speed of 40 knots and a blistering top speed of 52 knots.