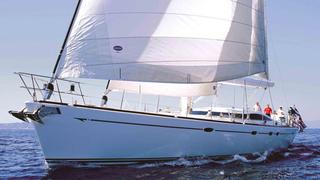 Another €300,000 price drop on sailing yacht Havana of London at OCI and YPI

A call to Matt Albert at Yachting Partners International confirms a further €300,000 price drop on his central listing with Rainer Wilhelm at Ocean Independence, the 30.5m cutter-rigged sailing yacht Havana of London.

Designed by Bill Dixon and built by Vitters in 2000 to ABS class, her second owner bought her in 2006 and has spent considerable amounts of time and money keeping her in first-class condition. A luxurious pear wood interior accommodates six guests in a large master suite and two twin cabins, along with a crew of four.

Never chartered and lying in Alicante for the winter, Havana of London is now asking €4.9 million.