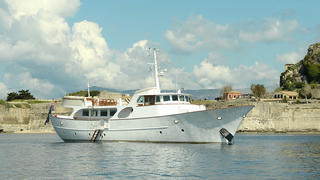 The classic 25 metre canoe-stern motor yacht Vanilla, listed for sale by Charles Carveles at Edmiston & Company in London, has had a further €200,000 price reduction.

Built in steel by British yard Fairmile, Vanilla was delivered in 1965. The yard had previously been famed for its production of fishing boats, tugboats and high speed motor launches and went on to build a total of eight luxury yachts for overseas and UK buyers. Accommodation on this yacht for sale is for five guests in three cabins consisting of a master suite, VIP twin and a single, all with full en suite facilities.

The guest accommodation can, however, be easily increased to seven guests in three cabins by turning the single into a twin cabin with an additional bunk and increasing the twin cabin to one double and one single bed, creating a family room. She is also capable of carrying up to four crew on board.

Vanilla has been carefully maintained to preserve the look of an English country home, with a saloon featuring overstuffed settees and armchairs along with exquisite joinery detailing, while a full media centre including a large flatscreen television brings her right into the present day.

The sundeck carries on this air of languid relaxation, with built-in upholstered seating, two tables, a barbecue and six directors’ chairs, all sheltered by a large parasol. Twin 350hp Detroit Diesel engines, rebuilt in 2011, give her a stately cruising speed of 8.5 knots.