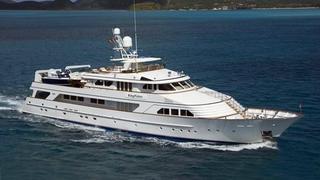 Price reduction on superyacht Kingfisher at Northrop & Johnson and Burgess

On July 11th 2011 I reported a $600,000 price drop on Feadship's 43.28m motor yacht Kingfisher, a joint listing with Kevin Merrigan at Northrop and Johnson and Burgess; now Kevin sends news of a further $1.4 million reduction.

Built by the Van Lent yard, Kingfisher was delivered in 1987. This superyacht has been owned by some of the world’s most experienced yachtsmen, each one contributing something special to her rich patina of history. Last refitted in 2008, she is Bureau Veritas classed and MCA compliant, sleeping up to 12 guests in a master, two double and two twin cabins. Now fitted with zero speed stabilisers, Kingfisher also has an upgraded electronics system.

Docked in Fort Lauderdale, Kingfisher is now down from $12.9 million to $11.5 million.