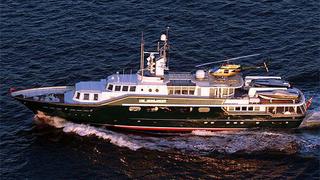 Another price reduction on superyacht The Highlander at Bradford Marine

Built at the De Vries shipyard in 1985, she offers the highest quality Dutch construction with the superb styling of world renowned Jon Bannenberg. With five staterooms including a full beam master, there’s also the option of converting the main deck observation room into a sixth stateroom. She offers all the luxurious amenities one would expect from this high quality, full displacement hull with great sea keeping abilities and a helipad for quick arrival or departure.

The Highlander has been effectively used to entertain corporate CEO’s, Heads of State and Royalty by the Forbes Family and Forbes Magazine. With true trans-Pacific range The Highlander has cruised around the world including the Pacific Rim, Saint Petersburg in Russia, Alaska, the Amazon, Caribbean, and America. She's known worldwide as the Ultimate Capitalist Tool and is now down from $9.9 million to $7.9 million.