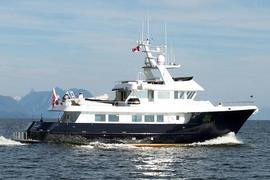 Now for news of the third yacht sold in as many working days in June as Bill Solt at Ardell represented the buyer in the sale of the 27.8m motor yacht Shine, a joint listing with Maarten Ten Holter at Vripack and Chuck MacMahon at Northrop & Johnson.

She's an expedition motor yacht built in steel by Aleutian Yachts in 2007/2008. Shine was stoutly constructed as an all-ocean passagemaker and is exceptionally robust and significantly upgraded. Accommodation is for 10 guests in a main deck owner’s suite and four double staterooms below. A single 1410hp Caterpillar engine gives Shine an impressive range of 5,000 nautical miles at 8 knots and she was repainted as recently as September 2010. Her asking price was $5.75 million.