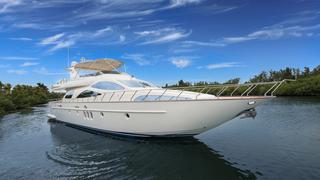 The 24 metre motor yacht Antares has been sold with Jeff Partin at Camper and Nicholsons acting for the buyer and seller.

Built in GRP by Italian yard Azimut to a design by Stefano Righini, she was delivered in 2003 as one of the yard’s Carat 80 models and refitted in 2013. An interior by Marty Lowe features high gloss cherry wood, leathers and designer fabrics throughout and she accommodates up to seven guests on the lower deck in four cabins consisting of a master suite, VIP suite and two twins, all with LED television screens and en suite bathroom facilities. In addition, there are quarters for two crew.

The open plan saloon has huge windows and a lounge area in shades of blue and white with large settees to port and starboard, further occasional chairs, an entertainment centre including a 46 inch Samsung television screen and a formal dining area forward with an extending table. Her fully sheltered aft deck offers al fresco entertainment and dining on directors’ chairs grouped around a large dining table with music from outdoor speakers. Up on the flybridge is more comfortable seating, along with sun pads and lounge chairs. She features two helm stations, one inside forward of the galley and the second on the flybridge.

Twin 1,850 hp Caterpillar engines give her a cruising speed of 26 knots.

A recent yard period saw $110,000 being spent on new exterior decks, an anti-fouling paint job and an overhaul of her engines and generators.