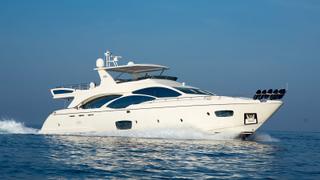 The 29.87 metre motor yacht Bamboo has been listed for sale by Antoine Larricq and Sinan Suleiman at Fraser.

Built in GRP by Italian yard Azimut to a design by Stefano Righini,Bamboo was delivered in 2010 and has had the same owner since new. The interior, by Carlo Galeazzi, welcomes eight guests in four cabins comprising a master suite, VIP suite and two twins. All guest cabins have entertainment centres, Sharp television screens and en suite bathroom facilities while the crew quarters sleep up to four members of staff aboard this yacht for sale.

In the main saloon, the dining table is to starboard with a wet bar to port equipped with fridge, icemaker and glassware storage. There is also a sophisticated entertainment centre including a 135-inch Sharp television screen and a Bose stereo surround sound system

Up on the flybridge is further comfortable seating, along with sun pads, a Jacuzzi and lounge chairs. This entire area can be protected by an electric sun roof when desired. She features two helm stations, one inside forward of the galley and the second on the flybridge. A large foredeck lounging space is a bonus exterior area, perfect for sunbathing or relaxing.

Twin 1,600hp Caterpillar diesel engines allow a cruising speed of 18 knots topping out at 24 knots and she is fitted with zero speed stabilisers.