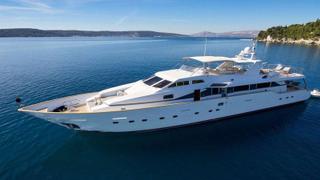 The 29.87 metre motor yacht Moonraker II has been listed for sale by Filip Jerolimov and Darko Kascelan at IYC.

Built in GRP by Italian yard Azimut, Moonraker II was delivered in 1992 and has had several refits since, most notably in 2015. An interior by Terence Disdale uses mahogany joinery with leather panels to create plush accommodation for eight guests in four cabins comprising a master suite, VIP suite and two twins convertible to doubles. All guest cabins have entertainment centres, television screens and en suite bathroom facilities while the crew quarters sleep five staff aboard this yacht for sale.

In the main saloon, the dining table is to starboard with a wet bar to port equipped with fridge, icemaker and glassware storage. There is also a sophisticated entertainment centre including a large Samsung television screen and a Bose stereo surround sound system.

The aft deck offers sheltered al fresco dining on a large table with built in seating, while on the sundeck, she features a large dining table with U-shaped banquette seating, a bar and an enormous deck area with teak sunbathing area shaded, when required, by a Bimini top.

Her top speed is 24 knots and she boasts a maximum cruising range of 550 nautical miles at 16 knots with power coming from two 1,525hp MTU 8V396TE94 diesel engines.