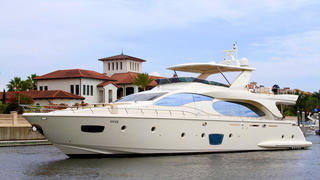 The 26.82 metre motor yacht VVV, listed for sale by Rickard Charleson at Galati Yacht Sales, has been sold with the buyer introduced by Nautikos.

Built in GRP by Italian yard Azimut to a design by Stefano Righini, she was delivered in 2009 and upgraded several times since, most recently in April 2016. Designer Carlo Galeazzi gave her a cherry wood interior throughout accommodating eight guests in four cabins consisting of master suite with a king sized bed, a VIP suite and two twins with Pullman berths, all with entertainment centres, flat screen television sets and en suite bathroom facilities.

The saloon has comfortable seating on leather settees and armchairs, along with a coffee table while the entertainment centre includes a 42 inch Panasonic plasma television screen on a rise and fall mechanism and a Blu-Ray DVD system. Forward is a dining area with seating for eight guests.

Up on the flybridge the owner and guests can relax over a cocktail or two on U-shaped upholstered seating to port facing a gas barbecue grill, marble topped bar and a Jacuzzi tub forward shaded by a GRP hard top.

Twin 1,825hp Caterpillar engines give her a cruising speed of 27 knots and she is fitted with Trac zero speed stabilizers.