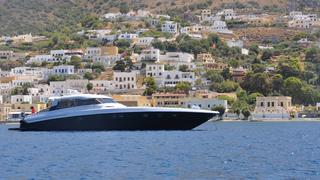 Baia motor yacht Danush back on the market

Sold in June 2018, the 24.39 metre motor yacht Danush is back on the market, listed for sale by Giulio Riggio at Fraser.

Built in GRP by Italian yard Baia, Danush was delivered in 2004 as one of the yard’s Panther 80 models. Accommodation is for up to seven guests in three cabins consisting of a master suite with an entertainment system including a 21 inch LCD television, a VIP suite and a twin cabin with a Pullman berth, all with full en suite facilities. In addition, two crew are accommodated in an en suite twin aboard this yacht for sale.

The interior is light and tasteful, with a relaxation area in the saloon on built in suede settees, a bar and an entertainment centre including a 42 inch LCD television screen. Forward is a small informal dining area for four guests at a round table.

Most of the action takes place in the large cockpit which has wrap around seating in immaculate white leather around three rise and fall varnished cocktail tables. Behind the seating is a large sun pad upholstered in white leather while steps lead down to a good sized swim platform. All the leather and sun pads were renewed in June 2012 and there were further upgrades in the winter of 2015.

Above all, Danush was designed to speed her guests between Mediterranean hot spots and accordingly she is powered by twin 2,000hp MTU engines giving her a maximum speed of 58 knots and a range of 1,000 nautical miles at her cruising speed of 42 knots.