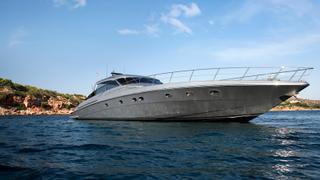 The 24.29 metre motor yacht Tobchi has been sold in an in-house deal at SuperYachtsMonaco.

Launched in 2009 and continuously upgraded ever since, she was built from GRP by Italian yard Baia to a design by Alberto Ascenzi as part of the Italian yard’s Atlantic 78 series.

Accommodation is for up to six guests split between three en-suite staterooms, including a full-beam master cabin, a double and a twin cabin with a Pullman berth. The crew quarters are situated in the bow and allow for a staff of three people.

A large sunpad dominates the aft deck, while the main saloon area includes a C-shaped wrap of seating to starboard. Further lounging space is available below decks.

Her entertainment centre is highly specified with a Samsung 3D television, Apple TV and Bose Dolby surround sound system. The galley is similarly well kitted out, with appliances by Miele, Bosch and Kenwood, and her garage houses a Novamarine RH340 jet tender.