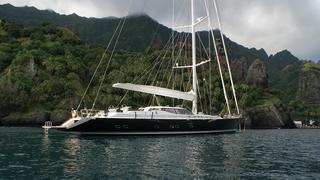 The 37 metre sailing yacht Damahwil, listed for sale by Bernard Gallay Yacht Brokerage, has been sold in an in-house deal.

Built in aluminium by Dutch yard Bayards Shipyard to a design by the inimitable Dubois Naval Architects, she was delivered to her previous owner in 2010 as a fast cruiser/racer and was refitted in 2015. Sloop-rigged, she has been optimised for sailing short-handed by the inclusion of simplified sailing systems and has trans-oceanic capabilities.

Her large interior volume, decorated in teak panelling throughout, can accommodate up to eight guests in four comfortable cabins including a full-beam master suite, and all come with en suite shower facilities. Southeast Asian touches are an underlying influence in her décor, used subtly throughout.

She features two decks including a raised saloon and a fixed Bimini top over the cockpit, which has mechanically operated sliding windows. There is ample stowage forward of the mast and a fold down bathing platform.

Damahwil has a fixed keel and is equipped with a seamless carbon mast, Oceanfurl boom and SCR continuous airfoil carbon rigging from Hall Spars as well as a full set of 3D moulded lightweight sails consisting of main, genoa, jib and staysail provided by North Sails. Under power, a 540hp Caterpillar engine gives her a cruising speed of 12 knots.