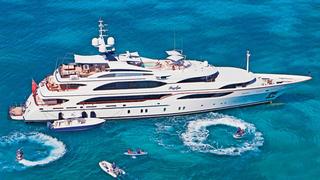 Things continue to change on the central agency front as I learn that Merle Wood at Merle Wood & Associates has now joined Mark Elliott at International Yacht Collection to list the 55.8m motor yacht Four Aces for sale.

Four Aces was designed by Stefano Natucci and built by the Benetti yard in 2005 to Lloyd’s class and MCA. She has an interior designed by François Zuretti, and can accommodate up to 14 guests in a master, VIP, two doubles and two twins plus two Pullman berths. Zero speed stabilisers have been installed and she had an extensive refit and upgrades in 2009.

This oustanding Benetti has been updated and modified to surpass her condition when she was originally launched. Four Aces was built with a split level master suite with private access to the foredeck, a helipad, and the VIP cabin on the sky lounge deck. She has one of the largest upper sun decks with a swimming pool and spa pool.

Currently in the Caribbean, Four Aces is asking $36.9 million.