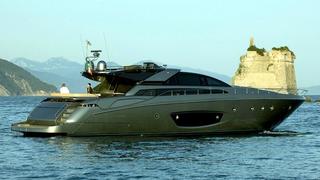 Make that 25 sales so far in 2012 as I've just learned that Peter Bennett at bluewater closed on the sale of his central listing, the 26.4m motor yacht Rhino with MarineMax in Pompano, Florida representing the buyer.

Built by Riva to RINA class in 2011, she's a Domino 86 model and has every conceivable extra and upgrade available, including Mitsubishi ARG retro fitted stabilizers.

She sleeps eight guests in three double cabins and a twin cabin and offers a large volume over two decks. Outside spaces are generous, with a dining table on the aft deck and large sunbathing area with bar on the sundeck.

With low hours and not used for charter, Rhino remains in brand new condition and has been maintained to the highest standards by a diligent Captain.