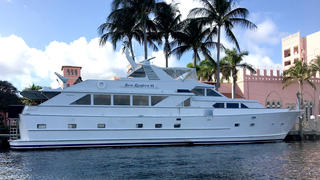 The 27.43 metre motor yacht Sea Loafers II, listed for sale by Barry Flanigan at Bradford Marine Yacht Sales, has been sold with the buyer introduced by Allied Marine.

Built in aluminium by Broward to an in-house design, Sea Loafers II was delivered in 1988 and substantially refitted in 1995 and 2005. Her interior in cherry wood panelling by designer Susan Puleo sleeps six guests in three roomy cabins consisting of a master suite, VIP suite and a twin cabin, all with entertainment centres, television screens and en-suite bathroom facilities. There are also quarters for four crew in two cabins.

In the saloon is a generous seating area to port with a large settee, two armchairs and a rosewood coffee table facing an entertainment centre to starboard including a plasma television screen and a stereo surround sound system. Further forward is a full wet bar with a fridge and ice maker. The country-style galley has a large dining table to serve both formal and casual meals.

Outside relaxation areas are plentiful and include the aft deck with a seating area to port and a bar to starboard. Up on the flybridge are numerous seating areas, an upper helm station and an outside bar with a built-in sink and separate ice maker. The forward part is protected from the sun and can be partially enclosed with Isenglas sides. Twin 1,050hp Caterpillar engines give her a cruising speed of 14 knots and a maximum speed of 17 knots.