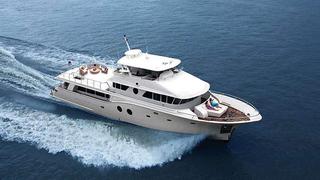 Built by Argos Marine in 2009 to a design by Howard Apollonio, Dancing Milly III was refitted in 2011. A four stateroom layout accommodates eight guests in a VIP stateroom, double and twin cabins below and an impressive master suite on the flybridge aft of the wheelhouse. Twin 1650hp Caterpillar engines give her a cruising speed of 22 knots and a range of 4,000 nautical miles.