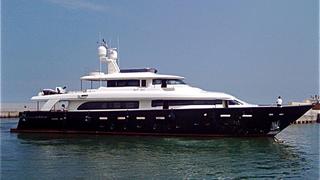 Kudos for the first December sale go to Jeremy Comport at Camper & Nicholsons who closed on the sale of his central listing, the 32.6m motor yacht Navetta 33 yesterday.

Jeremy tells me he worked closely with the CRN sales team to bring the deal to a successful conclusion, while a new name hasn't yet been chosen. Built to RINA class by Ferretti in 2008 she's the second hull in their Custom Line Navetta 33 range. She sleeps 10 guests in four staterooms and almost €1 million in extras brought real added value. Twin MAN 1550hp engines give the Navetta 33 a cruising speed of 16 knots.