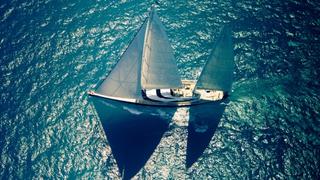 The breeze was set at 12-14 knots as the sailing yachts headed out to compete on a course which would see the fleet circumnavigate Virgin Gorda. For many of the yachts, the inaugural Caribbean Superyacht Regatta & Rendezvous is the first opportunity to measure their skills against competitors they will be facing for the rest of the Caribbean season and then again when racing returns to the Mediterranean in June at the Loro Piana Superyacht Regatta.

Zefira and Lady B both had good starts, followed by the rest of the fleet at two minute intervals. Richard Branson headed out in his tender from nearby Necker Island to take in the action and the thrilling sight of superyachts racing in this area.

'This is one of the most gorgeous courses... a great day. The event is superb,’ said Peter Corr, owner of Aiyana.

The race takes in the harsh rugged west coast, putting in several upwind tacks, where Lady B and Sojana overtake Twizzle. Powering behind them is Hanuman which moves up the fleet at astonishing speed. As the fleet separates considerably for the long downwind spinnaker leg, its time to take in the scenery including the appearance of two breaching whales which add some excitement to the long and very hot leg.

The wind picks up at the top of the island, where the yachts squeeze between Round Rock and Ginger Island, before passing The Blinders and Broken Jerusalem. As the finish line draws closer, the yachts pass The Baths then on to the dramatic Dog Islands to the finish.

Once again, the J-Class yacht Hanuman was first around the course, but the real battles were among the performance cruisers Sojana and Zefira. Zefira’s owners, who are long-time members of the Yacht Club Costa Smeralda had high praise for the new YCCS facility in Virgin Gorda:

‘It is so wonderful to come from halfway across the globe to a warm welcome and something that feels familiar. The YCCS always does things to the highest level and Virgin Gorda is the very best of the BVI.'

The pirate-inspired Tender Treasure Hunt turned into a contest between three teams – the crew from M/Y Go, M/Y Chanticleer and M/Y Kelly Sea raced around North Sound in a battle of brainpower, horsepower and (occasionally) foot speed to see which team could unearth the clues, puzzle out the riddles and claim the ultimate prize at the afternoon’s end. Along the way, they got the opportunity to check out Leverick Bay, Prickly Pear, Mosquito Island and Saba Rock, ending at Oil Nut Bay in time for lunch. Between hiking Mosquito Island, swimming ashore to Prickly Pear and circling Saba Rock (several times), the crew battled hard, sometimes through trickery, to win. But M/Y Kelly Sea, captained by owners Bob and Kelly Schmidt, outmanned and outgunned the others, claiming victory by an hour and hoisting the winner’s bottle of Mount Gay rum in triumph.