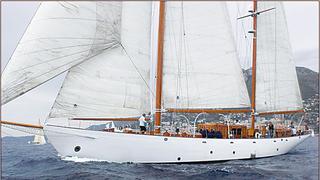 The 35 metre classic sailing ketch Aries, built by Camper & Nicholsons in 1952, is to be auctioned online by Dutch auctioneers Troostwijk on behalf of De Lannoy Holding. The Internet-only auction, which opens on 6 August at 14.00 CET and closes on Monday 20 August at 14.00 CET, has an accepted starting bid of €50,000.

The yacht is currently in drydock undergoing maintenance at the expense of her current owner, including hull planing and bottom painting at Cantiere Amico in Loano, Italy, and will be ready to hit the water soon. However, she is being kept out of the water so that potential buyers can inspect her above and below the waterline by appointment on 18 August. She will be launched once she is sold or when the auction closes, and her new owner can sail her straight out of the yard.

Built in Burmese teak on steel frames, Aries sleeps eight in four cabins, all en suite, and has crew quarters for four. She has teak decks, Oregon pine masts and brass deck fittings. Guest areas include the deckhouse and saloon/dining area, which are decorated in traditional style with wood panelling. A 300hp Cummins engine gives her a 8.5 knot cruising speed under power, and she comes equipped with two gensets, GPS, radar, autopilot, satellite communications and navigation equipment.

Aries has an interesting and colourful history. Her keel was initially laid in 1939, but with the onset of the Second World War and family circumstances she was mothballed and only finished and launched in 1952, when her first owner was the tobacco tycoon RJ Reynolds. Only seven years later she was donated to the American Geographic Society, serving as an oceanographic research vessel in Bermuda. By 1961 she was back in private hands, becoming the property of Greek shipowner John Theodoracopulous who took her to Greece where she was once again cruised as a yacht.

Little is known about what happened to her in the late sixties and seventies, but she popped up again in the early 1980s when Canadian Jene Jensen restored her, fitting a new interior and Bermudian rig. She chartered for several years in North America and was dismasted in a Caribbean hurricane in 1989. Thereafter she returned to Europe, where another restoration was started in the early nineties but her then owner ran into financial difficulties and was forced to put her up for auction.

Her current owner bought Aries at this auction and undertook a restoration in 1996-7 in the Netherlands which gave her a new rig and sails, new electrical systems and spruced up her interior. Aries then chartered in the Caribbean, Panama and Costa Rica before returning to the Mediterranean, home port Cannes, where she has continued to be a very successful charter yacht with an extended summer season from late April to early November.

Although Aries was built under Lloyd’s Class her class has not been maintained for at least 20 years.

For more information on the yacht's specifications, details of her refits and general condition or to bid for this beauty, visit Troostwijk Auctions.