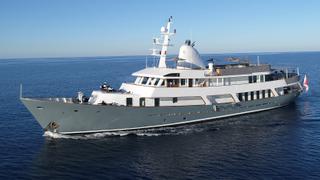 The classic 48.51 metre canoe-stern motor yacht Menorca has had a central agency change and is now jointly listed for sale by Edmiston & Company and Ocean Independence.

Built by in steel by the Dutch shipyard Botje Ensing, Menorca was delivered in 1961. Rebuilt in 2004, and last refitted in 2017, she now boasts a completely new interior in a Hamptons beach club theme and deck layout by French company Mare e Terra.

A popular charter yacht, she has voluminous accommodation for up to 14 guests in seven cabins consisting of a master suite, VIP suite and five convertible double cabins, all with full entertainment centres, television screens and en-suite shower facilities. A further five cabins sleep 11 crewmembers aboard this yacht for sale.

The main deck saloon boasts floor to ceiling windows, comfortable settees, a piano and an entertainment centre including a large television screen, while forward is a formal dining area. The aft deck seats 12 guests for al fresco dining, while the sundeck offers an outdoor cinema with a Dolby stereo surround sound system and there is also a sunbathing area next to a Jacuzzi.

Twin 1,020hp MAN diesel engines give her a range of more than 2,750 nautical miles at her cruising speed of ten knots and she is fitted with zero speed stabilisers.