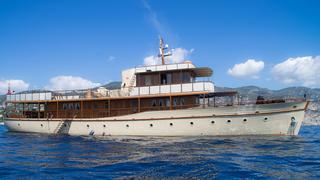 Classic motor yacht Over the Rainbow for sale

The 34 metre classic motor yacht Over the Rainbow, meticulously restored by Belgian artist Jean-Michel Folon, has been jointly listed for sale by Julien Solari at WOY and Wes Sanford at Northrop & Johnson.

She was the subject of an auction in Monaco just prior to the 2015 Monaco Yacht Show, but received just one firm bid of €4 million, which the owner turned down.

Built in teak over oak frames by Welsh yard Dickies of Bangor, she was delivered in 1930 named Janetha IV and cruised extensively in Scotland until she was requisitioned by the Royal Navy at the outbreak of World War II. After the war she served a spell as a floating casino anchored off the harbour of Athens, Greece, before being bought by an English owner who used her as a successful charter until she was acquired by another owner who, sadly, allowed her to fall into a state of disrepair on the Cote d’Azur.

It was here that the Belgian artist Jean-Michel Folon first saw her and fell in love with her classic lines. He determined to restore her to her former glory and in 2002 commissioned the Italian yard Mondomarine to undertake a full rebuild. During the work, which lasted until 2004, the external structure was recaulked and repainted while the interiors were carefully replaced.

Guest areas below deck were completely rebuilt in light cherry wood to increase a feeling of light and space while the number of cabins was reduced to increase the size of the new ones, now numbering three – a master and two doubles, all with en suite facilities.

OVER THE RAINBOW OF LONDON