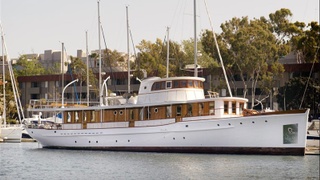 The 32 metre motor yacht Sobre Las Olas has been listed for sale by Will Petersen at Denison Yachting.

Built in wood by US yard Wilmington Boat Works to a design by D.M. Callis, SobreLas Olas was delivered in 1929 and, as usual with a yacht of this vintage, has had a chequered history. The yacht was built around the same time the Great Depression overwhelmed the country, and the original owners were forced to sell it to none other than J. Paul Getty, the famed oil tycoon. Getty owned the boat until 1932, when it began its journey through several owners, including William Randolph Hearst, the newspaper magnate.

Prior to the boat being purchased by the current owners in July 2003, it was scheduled to be sunk and sold for parts, the usual ending for yachts of this age. The new owners set out to keep the yacht’s original design, thus the dining saloon retains its classic Honduras mahogany. All of the lighting fixtures in the dining room are the originals that have been rewired and re-chromed.

Accommodation is for eight guests in four cabins comprising a master suite, VIP suite, double and a twin, all with en suite bathroom facilities. The crew quarters sleep five staff aboard this yacht for sale. Her top speed is a sedate 11 knots and she boasts a maximum cruising range of 3,000 nautical miles at 10 knots with power coming from two antique 125hp Atlas Imperial diesel engines.