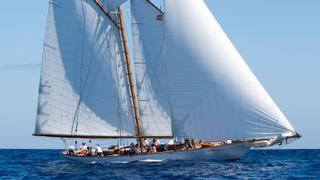 The classic 24 metre sailing yacht Kelpie of Falmouth has been sold with the buyer and seller represented by Mike Horsley at Edmiston & Company.

Built in pine on oak frames by US yard Henry Gamage, Kelpie of Falmouth was delivered in 1928 as a gaff-rigged schooner. Accommodation is for six guests in three cabins laid out as a master suite and two twins, all with en suite shower facilities, while a further cabin sleeps two crewmembers.

Kelpie of Falmouth did duty in World War II, serving with the US Coastguard. She was a popular boat to crew on and notably never missed a day’s service. Like many other yachts, the end of the war saw a change in ownership and she moved to the West Coast of the States.

As is so often the case with these classic yachts, she fell into disrepair and was abandoned. The story of her rediscovery is of epic proportions, from finding a tired old boat on the Californian coast in 2012, a 9,000-mile delivery back to a traditional Cornish boatyard some miles up a tidal river, and an 18 month-long rebuild from bare frames up. The pitch pine on oak frames hull was stripped bare, all tired wood replaced as necessary, and the stern completely rebuilt to bring her back to her original shape. In 2014 she went on to win the 2014 Classic Boat “Restoration of the Year” award.