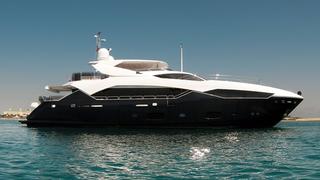 Currency switch and price drop on superyacht Stella at Yachtzoo

In late October I reported that the nearly-new 34.53m motor yacht Stella was for sale at Yachtzoo and now news arrives of a currency switch from Euros to sterling and a simultaneous price cut.

A Sunseeker Predator 115 built in 2011 to RINA class she has a natural, opulent interior featuring lacquered timber, hardwoods and leather with stone finishes. Accommodation is for 10 guests in a master suite, two double staterooms and two twin cabins while a pair of MTU 16V 2000 M94 engines give Stella a cruising speed of 20 knots and a maximum speed of 25 knots.