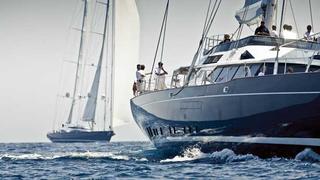 No wind, rainstorms and abandoned racing. That was the disappointing picture on the first day of the 2011 Dubois Cup – with Ed Dubois declaring ‘It’s my fault!’ But if the possessors of the world’s most expensive toys had been denied their playtime, except for firing a couple of water balloon catapults, they got an emotional fix at the owners’ dinner later.

Perhaps they realised that the disappointment of losing a day’s action in Porto Cervo’s idyllic playground was nothing compared with the pain endured by children with cancer, and they sat in silence as 14-year-old Birdy sang her chart-topping hit, Skinny Love.

Ed Dubois has found a new calling – not that he is likely to give up design when he, too, is at the top of the charts and is described by Shirley Robertson, presenter of CNN’s MainSail, as ‘the man of choice in the world of superyacht design’.

As CEO of the Dubois Child Cancer Fund (DCCF), he introduced two special doctors, Janice Kohler and Juliet Gray, who treated his daughter Minna after she was diagnosed with the rare childhood cancer neuroblastoma in 2005. Leading experts in their field, they are based at Southampton University in the UK, not far from the Lymington headquarters of Dubois Naval Architects.

The next day brought clear blue skies and a gentle 10-knot breeze that accelerated the 500-tonne Twizzle to over 10 knots as her owners provided the doctors with some well-deserved relaxation on the raised flying bridge, just aft of the hotshot professional sailors who were flown in to perform their own clinical-precision operations, albeit with a less critical potential outcome.

The 310-tonne veteran cruising yacht Timoneer won the day’s gybing duel on corrected time, old salt Tom Mclaughin of North Sails going on probabilities of a chance (55:45%) of more puffs inshore as the fickle breezes dropped. Zefira, Sailing Yacht of the Year in the 2011 World Superyacht Awards, crossed the line first. Twizzle came in fifth overall, her 19 extra race crew barely needing to flex a muscle, but was recognised for her hospitality.

‘Everyone’s a winner,’ declared Dubois at the prizegiving as all 14 Dubois yachts, including the motor vessels, were presented with a hand-engraved black crystal bowl as a memento. Always one to inspire and motivate, he acknowledged the builders’ and contractors’ skills in creating the yachts. ‘Malcolm McKeon and I just draw the lines with our team. You create the wonderful hulls, equipment and cabinetwork,’ he said. The Dubois Cup, sculpted in the shape of a carbon fibre sail and designed by the Dubois studio, went to Timoneer, with Nostromo taking second place and Zefira third.

Dubois’ wife Honor said she had held ‘Minna’s little hand’ before the child’s treatment, not knowing what the outcome would be. She explained the impact the illness had had on the family, and that it was a dream to be in Sardinia all together. Minna is now aged 10 and doing well.

YCCS Commodore Riccardo Bonadeo thanked Dubois for bringing his ‘extended family of superyacht owners’ to Porto Cervo, and everyone left the Dubois Cup 2011 a little richer for the experience, appreciating life more than whether or not they won or clocked up 20 knots in ‘bomb alley’. Birdy, at a grand piano, sang: ‘The sound of the waves as they crash to the shore. How perfect the world is!’ Dubois yacht owners no doubt agree, and look forward to the 2013 Cup attracting an even bigger turnout than this year’s supersailers, which stretched 450 metres end to end. The total Dubois fleet worldwide, since it beginnings in Lymington 31 years ago, is valued at over a billion US dollars in today’s prices.

Hopefully, the wind will blow hard in 2013 and the target of 10 million euros for the Dubois Cancer Fund will be achieved by owners and others digging deep in their pockets. Then, a 16-year-old Birdy – Jasmine Van Den Bogaerde, also from Lymington – will be able to let rip with her throaty voice about spinnakers surviving the course.

The Dubois Child Cancer Fund has been created in conjunction with Sparks, the medical research charity. To make a donation and for further information contact Lisa Stratton on Lisa@DuboisChildCancerFund.com