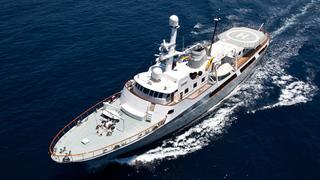 Julien Solari at Thierry Voisin gets in touch with news of a €1 million price drop on his joint listing for sale with Wes Sanford at Northrop & Johnson, the 61.3 metre expedition yacht Voyager.

Built by Spanish yard Astilleros y Talleres Celaya to a design by Sparkman & Stephens, Voyager was delivered in 1973. She was purchased in the early 2000s with the purpose of transforming her into the ultimate expedition vessel for charter. Carrying a helicopter with refuelling capability plus a large array of tenders and toys, she was used for extended cruising periods from remote tropical waters to extreme Alaskan winters. Following her sale in 2008, the current owners had the interior completely redesigned in a more modern style, as well as two technical refits in 2010 and 2012-2013.

SOLAS classed, she has accommodation for 12 guests in six staterooms. The full beam master suite is on the upper deck and, with a area of 42 square metres, is accessed from a private staircase. Below deck lie two double staterooms with king size beds, two doubles with queen size beds and a twin convertible to a further double. All staterooms have flat screen televisions and full en suite bathroom facilities. In addition, the versatile skylounge can be changed in seconds into a second master suite with a floor area of 44 square metres.

An attractive area for guests is the aft upper deck which features a large teak dining table, seating for 14, a barbecue and a wet bar – ideal for al fresco entertaining.

Twin 1,125hp Caterpillar engines give Voyager a range of 4,800 nautical miles and, lying in Turkey, she is now down to €6.4 million. See full details, specs and a photo gallery of superyacht Voyager for sale.