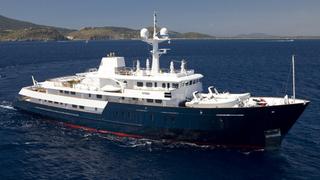 Hot news just in from Marco Vandoni at Ocean Independence as he sends word of a massive €5 million price cut on the 60m motor yacht Titan.

Launched in 1968 by Brooke Marine, Titan was originally a commisioned Royal Navy ship, HMS Beagle. But, after a rebuild completed in 2005 and a refit in 2008, she became a stunning superyacht. “Since 2007 there has been an incredible amount of work done to the boat,” explains Marco, “I estimate around €10 million has been spent on her in the past two years.”

The accommodation on board is impressive with 11 cabins, including the 90 square metre owner’s suite, plus five double and five twin cabins.