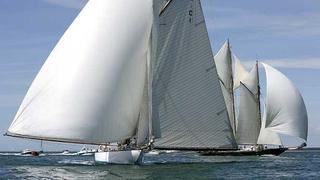 Hosted by the Royal Yacht Squadron in Cowes, Isle of Wight, the regatta will take place between 11 and 16 June 2012. The event is run in association with the New York Yacht Club and the Yacht Club de Monaco with the Royal Yacht Squadron as the Organising Authority and follows on from the success of the inaugural Westward Cup held in July 2010, in which four yachts – Eleonora, Mariette, Mariquita and Tuiga – competed for line honours.

Initiated to commemorate the 100th anniversary of the launch of the racing schooner Westward in 1910, one of the fastest and most famous of the Big Class racing yachts, which regularly competed in Cowes in her time, the Westward Cup has played no small part in a revival of and interest in Big Class yacht racing in the Solent and around the world.

Speaking on behalf of the RYS, David Aisher, Rear Commodore Yachting, commented that the organisers are hoping for maximum take-up of the invitations to enter the Westward Cup 2012. He said:

'The Westward Cup is a unique event for these exquisite racing yachts. Apart from the competitive and challenging racing opportunities that the Solent and adjacent waters can provide, there is the relaxing and welcoming atmosphere of Cowes and the many clubs here, the true "home of yachting" to many of these yachts. The Royal Yacht Squadron will provide a base for the owners and their guests, and, by staging the Westward Cup in Cowes, will also be providing the devotees of Big Class yachting a spectacle rarely seen in Solent waters.'

The Royal Yacht Squadron will run the racing along the successful lines of 2010, making maximum use of the waters around the Isle of Wight to ensure the captains and crews enjoy challenging and competitive racing. Racing will be scored under the International IRC Rule.

The Royal Yacht Squadron may also produce results under a modified CIM rule to enable comparison of results using a rule used at other regattas by these magnificent yachts. It is also the intention to include a race around the Isle of Wight, subject to weather conditions.