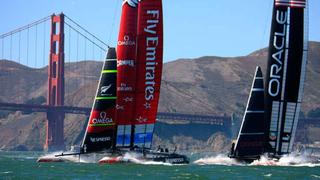 But before the Challenger could move on to try to win another – and final – point needed to win the Cup Finals against Defender Oracle Team USA, Race 12 was postponed due to high winds kicking up over 20 knots on San Francisco Bay.

Going into today's racing, Emirates Team New Zealand leads the series by 8 to 1 and needs one more race under its belt to win the America’s Cup, while Oracle Team USA needs to win eight consecutive races to retain the Cup. Race 12 is scheduled to start at 2:15pm Pacific Time, and the racing action can be seen live on the America's Cup YouTube channel.