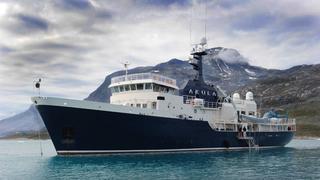 Simon Ting at bluewater asks me to broadcast the fact that 59 metre expedition yacht *Akula *is now in the St Barts area and available for viewing with 24 hours notice.

Built by Holland’s Amels yard in 1974 as a pilot vessel for the Dutch Navy, she was converted into a superyacht by Vosper Thornycroft in England in 1999, at which time a helicopter deck and hangar were also added. Three Deutz 600hp engines give Akula a cruising speed of 13 knots and her rugged build quality makes her capable of worldwide cruising.