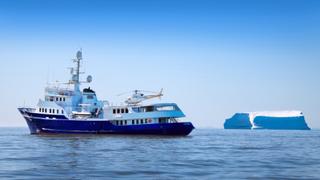 The 49 metre expedition yacht Asteria, listed for sale with Jim Acher at bluewater, has been sold with the buyer introduced by bluewater and James Lloyd at Edmiston & Company.

Asteria was built by Greece’s Anastassiades yard and delivered in 1970 as an ocean-going salvage tug. She was converted in 2000/2002 by Northport Engineering in New Zealand into a world-cruising expedition yacht. A large saloon has comfortable seating and a 72-inch 3D television screen with surround sound, plus a formal dining area for 14.

Accommodation is for 12 guests, including a master suite on the upper deck with an adjoining dressing room and a private study. On the main deck, two of the four double staterooms with queen size beds can be converted into twins, and there is a further twin cabin, all with en-suite facilities. She also has space for 22 crew across 11 cabins.

Her dedicated heli-deck can accommodate medium-sized helicopters for up to six or seven passengers such as the Eurocopter B3 and B4, and Bell 407. A single 1,850hp Caterpillar engine gives Asteria an enormous range of 7,000 nautical miles with a cruising speed of 10 knots, and she is fitted with Quantum zero-speed stabilisers. She has safely sailed through the North West Passage and to both North and South Poles, made possible by a water capacity of 70,000 litres.