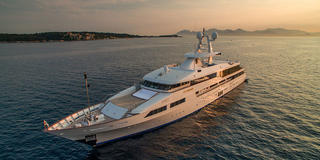 The 59 metre motor yacht Le Pharaon has been listed for sale by Tomaso Polli at Edmiston & Company.

Built in steel and aluminium by Dutch yard Feadship to a design by De Voogt Naval Architects, Le Pharaon was delivered in 1989 and has had the same owner ever since. Accommodation is for 12 guests in six cabins consisting of two VIP suites on the main deck while on the lower deck is the full beam master suite, a double and two twins, all with entertainment centres and en suite bathroom facilities. In addition, there are quarters for 13 crew aboard this yacht for sale.

A massive main saloon has a lounge area with seating in blue and white under skylights allowing the sun to pour in while forward is a more formal area with comfortable seating, a bar with four stools and an entertainment centre including a large screen television set and multiple concealed stereo speakers. Further forward is a dining area with seating for 12 guests under a mirrored ceiling.

The main deck aft has a table, chairs and rattan armchairs for al fresco dining while the upper aft deck comes with two separate tables, each surrounded by chairs and each shaded by a large parasol.

In 2003, she was extended by 5 metres during an extensive refit at Kusch Yachts in Germany, giving her a beach club featuring a spa and a glass-bottomed observation/seating area. Twin 1,410hp Caterpillar engines power her to a range of 2,700 nautical miles at 15 knots.

Lying in the South of France, Le Pharaon is asking €14 million.