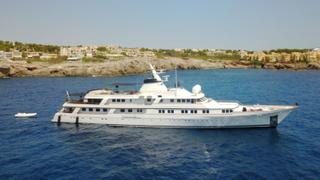 Sold in September 2016, the 60.56 metre motor yacht Kingdom Come has been renamed Sanoo and is back on the market, listed for sale by Vesa Kaukonen at KK Superyachts.

Commissioned by a scion of the Mercedes-Benz dynasty, Sanoo was built by Dutch yard Feadship to a design by De Voogt and delivered in 1979. She was later sold to the Lebanese prime minister who owned the yacht for over 30 years. He was assassinated in 2005 and the yacht stayed within the family until mid-2014.

In 2015, this yacht for sale had a full refit with the entire interior being replaced.

She accommodates as many as 18 guests in nine en suite cabins. Every cabin has a theme of colour and materials and each is different. The cabins have been updated while the original Egyptian marble in the en suite bathrooms is still left in place from when the yacht was launched. Her interior now feels brand new yet cosy, somewhat like a large country house, yet she still has the classic lines and characteristics of a 1970’s Feadship.

The interior has some special touches such as leather staircases and reconditioned flooring from a British bank, while outdoors she has a huge sun deck once the tenders are in the water, allowing space for a dance floor, sun loungers and games equipment. This deck also has a custom barbecue grill fitted into the bulkhead as well as a large Jacuzzi spa tub.

Twin 3,155hp MTU diesel engines give her a cruising speed of 16 knots and she is fitted with at anchor stabilizers.