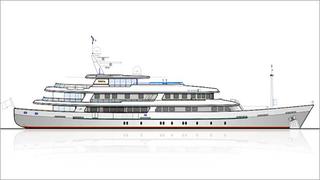 She is part way through a major refit that would transform her into an timeless and elegant ocean-going superyacht, but Fils de Grace is now being put on the market by her owner after the tragic loss of a family member in 2011.

Designer Tim Saunders of Tim Saunders Yacht Design (TSYD) spoke passionately about the project, named Touya by her owner, which he has been involved with from the start: 'She is a well advanced but incomplete project. She will probably attract a new owner who wishes to take short delivery of a distinctive, high volume and very comfortable ocean-going cruiser for private and or charter use.'

Indeed Fils de Grace is a yacht of great character that has had not one but many pasts, starting life in 1968 as a 53.5 metre cable laying and repair ship built by renowned Dutch shipyard EJ Smit & Zoon. After 30 years of operating in Northern European waters in that capacity she changed course completely, becoming a private motor yacht called Sir Arthur J in 2003. By 2007 she had been passed on to her next owner who named her Fils de Grace and started a refit, which was never completed.

Her current owner discovered her in Italy in 2009, seeing past the idiosyncrasies and neglected state of repair to her great potential as a timeless, elegant and comfortable ocean cruiser in the spirit of the 1930s. What she had going for her was an outstandingly strong steel hull, which was duly surveyed, tested and signed off by Bureau Veritas and MCA, and the promise of a more than 10,000 nautical mile range at 10 knots - perfect for the round-the-world cruise the owner dreamed about doing.

The yacht was then moved to the RMK Shipyard in Tuzla, Turkey, where work began to change almost everything else. With a radical transformation conceived on Tim Saunders' drawing boards, she was completely stripped back to her bare steel framework, and her interior gutted - even some structural bulkheads were modified to open up the interior for a new optimised layout. In a space that once housed 7.5 metre cable drums there is vast potential for a high volume superyacht with no compromise on dimensions or comfort.

With the intention of both simplifying and refining, her exterior remodelling entailed changing her sheerline to enhance her horizontal lines and windows, raising her top deck by 30cm to increase the ceiling height of the accommodation beneath and extending the aft accommodation on main and bridge decks to allow for a huge sun deck up top. The attractive canoe stern, however, remains original. 'We chose to leave this honest part of the yacht as the original designer would have wanted it,' explains Saunders.

Working with Saunders have been the owner's representative and naval architect/marine engineer, and Frank Mulder and the team from Mulder Design in the Netherlands.

Fils de Grace has been fitted with two new CATs, and all equipment and systems have been renewed right down to the piping and air-conditioning. She will also have new Wesmar dynamic and at-anchor stabilisers and her propellers have been replaced.

There are plans, however, to put her old props back on board - but melted down and recast as an ultra-thin and stiff bronze dining table.

Inside, her planned layout bears no resemblance to anything that has gone before. The general arrangement will provide accommodation for 12 guests in four good sized cabins on the lower deck, a 9.4m full beam VIP suite on the main deck (convertible into a cinema) and an owner's suite on the bridge deck. Part of the plan too is to have a central staircase within an atrium, and also an elevator - unusual for a yacht of this size. The elevator is intended not only for guests but with an additional galley stop, also for food service, enabling the crew to deliver all the dishes by trolley in one go to any dining table on any deck - thus ensuring the food arrives as the chef intended.

The interior has been envisaged with an elegant 'neo art deco' style, influenced by a fusion of the aesthetics, proportions, details and rich materials from 1930s art deco ‘Villa Empain’ in Brussels - together with key elements from a selection of modern, comfortable and minimalist superyachts.

Incorporated into the décor will be the finest custom-made materials ranging from coloured leathers and suedes to digitally controlled light switches, and there is extensive use of wood, stone and even gold leaf. Among the 12 different kinds of wood specified are Macassar Ebony, European Walnut and Green Ebony, while each cabin is to have a rare burl - Walnut Cluster, Thuya, Inbuya and Golden Madrone. Complementing those are a cornucopia of natural stones - onyx and marble - ranging from the tongue-tripping Capolavoro Chapa to the delicate Rosa Perlino.

All modern technology such as speakers and televisions are hidden behind moving picture frames or wall panels leaving a clean and uncluttered look, generating a comfortable environment and a serene atmosphere.

Crew cabins have been designed to conform to latest regulations and her general arrangement plans were scrutinised by one of the key charter brokers who, when asked what he would change to make the yacht perfect for charter, came up with several suggestions that have been incorporated into the design - among them, optimised circulation. Indeed the overall transformation of Fils de Grace will make her an ‘as new’ international standard superyacht complying to Bureau Veritas and MCA regulations for unrestricted navigation and charter.

As she stands today, says Tim Saunders, '95% of her steel work is done and about 90% of her interior and exterior design. She is 12 months away from completion.' All Fils de Grace needs is someone with the vision, energy and individuality to carry forward her transformation into a superyacht without equal.