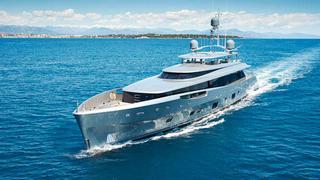 Time is running out to nominate a superyacht for the ShowBoats Design Awards 2015.

With boat show season in full swing, many of the industry’s foremost shipyards and designers are unveiling upcoming projects and are proudly displaying their recent superyacht launches. Several of the new builds on display at this year’s Monaco Yacht Show, including Polaris, Rossinavi’s new 48-metre planing superyacht, and Feadship’s 46-metre Como, pictured above, have already registered for the ShowBoats Design Awards 2015. The awards, which bring the specialist design skills of the superyacht industry’s most talented teams into the spotlight, are open to yachts of 30 metres LOA and up, which have been completed and delivered to their owners between 1 November, 2013, and 31 October, 2014.

With just one month remaining to nominate yachts for the ShowBoats Design Awards, entries are encouraged on behalf of eligible yachts in categories including various Sailing Yacht Awards, Motor Yacht Awards as well as Tender Design Award, Newcomer of the Year Award and the Environmental Protection Award.

The awards ceremony takes place on 23 February 2015 as part of the Superyacht Design Symposium social programme, set once again in the Austrian Alps in Kitzbühel. Attendance at the ShowBoats Design Awards is included in the Superyacht Design Symposium delegate package. Book your place before 7 November and secure the early bird rate of €995 +VAT, a saving of €255 on the standard delegate rate.