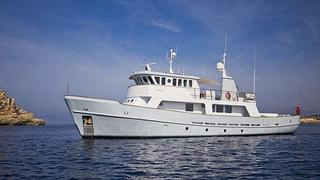 Originally commissioned by the Norwegian navy in 1978, Wisting was converted into an expedition yacht in 2005/2007 to satisfy her current owner’s desire for worldwide cruising. Accommodation is for eight guests in three double and two single staterooms and twin 200Kw, C9 Caterpillar generators give her a top speed of 11 knots.

Some of her technical highlights are: diesel-electric propulsion, a dynamic positioning system, 360° rotating bowthruster, zero speed stabilisers, two hydraulic boarding side ladders which can be used as bathing platforms and A/C throughout the yacht to tropical standards.