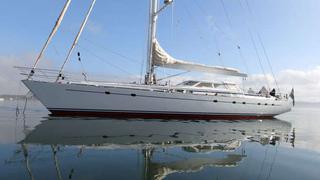 Built in aluminium by Dutch yard Jongert to a design by Doug Peterson working with the Jongert design team, Matakaoma was delivered in 1998 and has had several refits since. Accommodation is for six guests in three cabins consisting of a master suite with a queen sized bed and two twins, all with en suite shower facilities. An interesting feature is a recess in the superstructure's forward deck designed to store a tender but becomes a four metre Jacuzzi when filled with sea or freshwater.

Matakaoma underwent a major engineering refit in 2008/09 including a new engine, new Hundersted drive control with a variable pitched propeller for efficient fuel consumption and enhanced engine performance. There was also a complete refit of the interior soft furnishings and installation of new electrical equipment. The hull and substructure were also repainted. Also, she had all new electrical equipment installed. Over £800,000 was spent on this refit in the UK.

Between 2009 and 2012 she was unused, lying in Sweden. In 2012 her teak deck was replaced and she received a new generator and in 2014 she was completely repainted and her bottom sandblasted, recoated and anti-fouled.