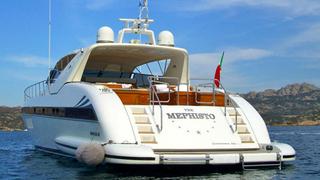 News from Alex Clarke at Denison Superyachts of a further €150,000 price drop on his listing for sale, the 25.07 metre motor yacht Mephisto.

Built by Italy’s Overmarine yard in 2003 as one of the yard’s Mangusta 80 series, Mephisto was delivered in 2003 and a €300,000 refit in September 2013 saw her engines and major machinery fully serviced, plus she received new interior decor. One of her key selling points is that she has less than 600 hours on her twin 2,000hp MTU engines which, coupled to twin Arneson surface drives, give her a cruising speed of 41 knots.

Mephisto accommodates up to seven guests in a master suite, VIP stateroom and a twin cabin plus two crew. All staterooms have satellite televisions and full en suite bathroom facilities. Other features include WiFi internet access throughout the yacht, a home theatre television system and a hydraulic passerelle.